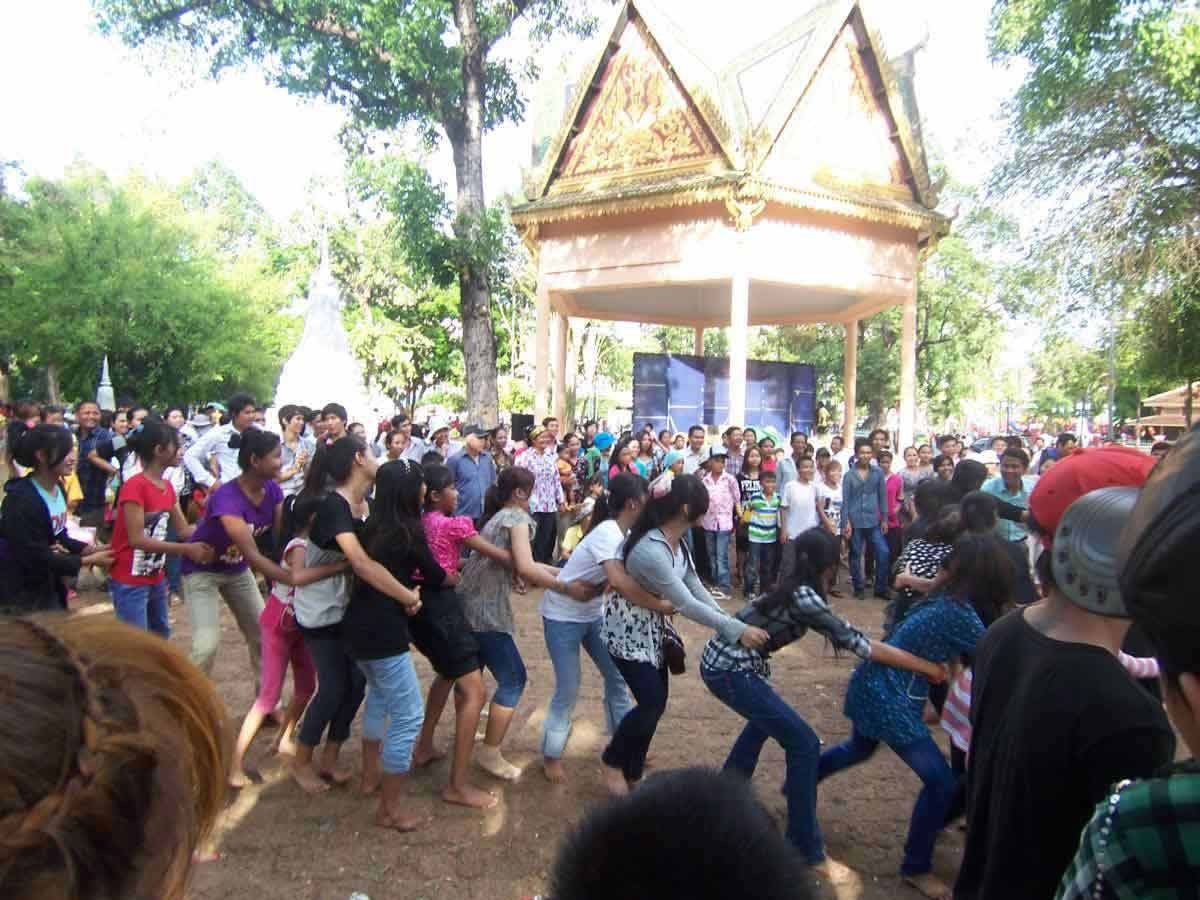 People in the world always say New Year celebrate their happy festival. They usually schedule and prepare it differently, depend on their belief and tradition. For Cambodian have hold it since past till the present.

The reason that cause to finish the old year for the are that: There have been some people believe that there is a story as following one time there were a person "KABEL MORHAPROHM" who asked three questions to "THORM BAL KOMA, the millionaire's on, who had known the three percepts of "TRAI VITH" and ail kinds of the animal's languages. They all had promised to cut the head of the person who failed the exam "THORM BAL" have no way to find the solution, he felled very hopeless, fortunately, there were two eagles which had spoken about these questions to make "THORM BAL" could find the way to settle the problems. The time of gambling arrived "THORM BAL " had spoken that:

1. In the morning, the happiness is on the face that is why all people have to wash their face.

2. In the afternoon, the happiness is on the breath to make the people take water to wash the breath.

3. In the evening, the happiness is on the foot to make the people wash their food in the evening.

The result had broken out "KABEL MORHAPROHM" had to cut his head to give to the oldest had take it go around PRAS SOMERU mountain about 60 minutes after they all bring it to put in the center of KUHA KUNTH MALAY of KAILA mountain. In the end of the year the 7 females angles had changed their turn to take the head and go around the mountain every year till the present. This is the reason to cause "SANG KRAN" or changing the old year into the New Year.

Some people have believed that for a period of one year the people always face the problems like diseases or serious obstacles to make them unhappy. When the one of the year they all had celebrated a great festival called "HAPPY NEW YEAR" and the people always prepare them-self, clean the house, and take food to offer the monks.

The festival usually is in 3 days period. The first day is "MOHA SANGKRAN" the second day is "VORNBORTH" and the third day is "THNGAI LIENG SAK". For that time they start to change the old year when the angle comes to get the duties from the former angle were schedule clearly.

WHEN IS THE KHMER NEW YEAR'S DAY CELEBRATED?

Since the period of Norkor Thom, the Khmer people used the Lunar calendar (The revolution of the moon), that why they dated Mekseh (name of the first lunar month, from mid-November to mid-December) as the Khmer New Year's month, and is the first month of the year. And Kadek(name of the last Lunar month) is the second one.

Buddhist devotees pour water over the statue of a revered Buddhist monk during the New Year Celebrations.

It means that we don't do it before 4th Keut of Khe Pisak (name of the Solar day) of Khe Chetr and not after 4th Keut of Khe Pisak (name of the 6th Lunar month), so that some of the Khmer people celebrate their New Year's day in Khe Chetr, such as the documents written by Mr. Chio-Takran, Khmer people celebrate this celebration with playing the hand-scarf-throwing game and they gather the statues of Buddha from everywhere to bath. In the other hand, the inscription in stone at Preah Khan is also stated this.

Talking about there celebrations in this New Year's Day. The Khmer people celebrate them traditionally as below.

A few days before the Khmer New Year's day, they prepared some food, clean their house, bought some news and so on. When the New Year's Day comes, they prepare something such as 5 candles, 5 incenses, a pair of 5 Baysey, a pair of Baysey Baklam, a pair of Slathor (a ceremonial ornament made with a banana tree trunk bake), a tray of cigarettes, some flowers and some fruits to sacrifice to the new heaven. When every is ready, they sit together near that place and light the candles to pray for happiness from the new heaven and start to pray before breaking each other. On the other hand, we have different celebrations during these 3 days of New Year's Day.

On the first day, they take some food to offer the monks at the monastery in the evening, they gather the sand to build up a sandal mountain around the pagoda or around the bany tree in the early evening, and they some drink to the monks and invite them to bany.

On the second day, children give some new clothes and money to their parents and grandparents. They also give some gift to their maids and poor people. In the evening, they go to build up the sandal mountain and start to bany that they consider it a Cholamony Chedey and ask the monks to bony and offer them the food to dedicate this sin to the spirit of the ancestor.

In the morning of the third day, they also invite the monks to bany for the sandal mountain. And in the evening, they bath the monks and statue of Buddha. During this third day, the people also play some traditional games such as the hand-scarf-throwing game, they kick the nuts game, the tug of war game, trot dancing (Battambang, Siem Reap). They also dance some traditional dancing such as Rorm Vong, Rorm Khbach…. etc.