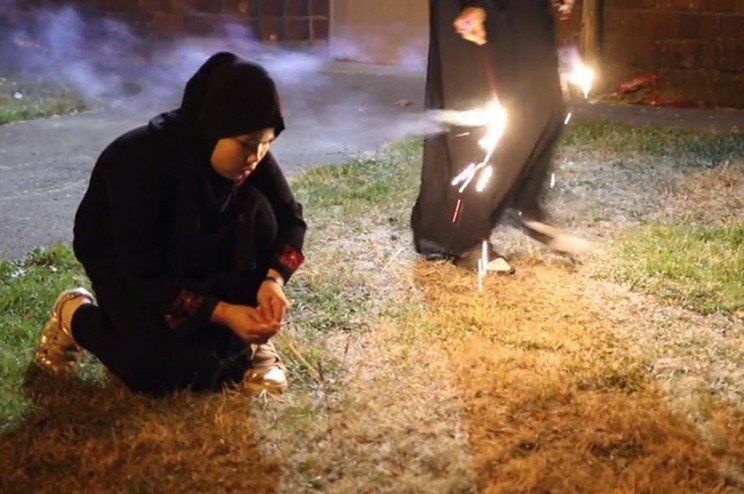 A still from Ramadan​

Young people from the Southeast Asian Muslim Cham community rarely see themselves represented in the media. But now, three Cham youth in south Seattle have brought their stories on screen in a documentary titled Ramadan. The film, which has won awards from the Southeast Asia by Seattle (SeaXSea) 2019 Film Festival and the Ethnic Heritage Council's film festival, will be shown on February 24 at the Seattle Asian American Film Festival (SAAFF).

The film is made up of video diaries filmed by Abdulgani Mohamad, Samir Nguyen and Yuhaniz Aly during Ramadan in 2016, while the three were sophomores in high school. Aly and Mohamad attended Cleveland High School, and Nguyen attended Franklin High School. All three are now first-year college students.

The students' handheld footage, sometimes grainy and shaky, is a candid glimpse into their daily lives, breaking the Ramadan fast with family, going to school, praying with the Cham community.

The film had its genesis in a Southeast Asian Young Men's group facilitated by Asian Counseling and Referral Service (ACRS). Making the film was an opportunity for Cham youth to share their culture and identity, which is not widely understood by outsiders, said Joseph Mills, a co-facilitator of the group and editor of the film. "There's a lot of assumptions about who they are and what they practice and what they believe, especially being from southeast Asia," Mills said.

The Cham people are found mostly in Cambodia and Vietnam, and have been persecuted in both countries. Most are either Muslim or Hindu, and belong to a distinct culture with centuries of history. Many sought refuge in the United States during and after the Khmer Rouge regime in Cambodia, which killed 100,000 Cham people. In King County, the Cham community is concentrated in Lacey near Olympia, and in the Rainier Valley, where the Cham Refugees Community center is found.

The south Seattle Cham community is tight-knit, said Aly, who grew up in it. Aly was recruited to be part of the film so that it would reflect the experiences of a young woman as well as young men.

In their video diaries, Aly, Mohamad and Nguyen come across as devout and serious about Ramadan. "We wanted to kind of inspire our youth that it's totally okay to express your religion," said Aly. "Because I think some people struggle showing their identity."

But the film also has lighthearted moments, and the youth are open about the daily challenges of Ramadan. "We were being very real," said Aly.

In an early scene, Aly's footage takes us in among women praying in a small room. She's only been there ten minutes, but she's dying from the heat. Later we see Nguyen take a break from playing frisbee in the hot sun to film a video diary. He's dehydrated and has a headache. Late nights and early mornings of prayer cut down sleeping hours. "Ramadan kind of sucks during school because I only get like two hours of sleep," Mohamad says in the film.

But the three also find Ramadan rewarding and transformative. Ramadan helps young Muslim high school students orient themselves out into the world, and away from the temptations of drugs, social media and video games, Nguyen says in the film. For Aly, Ramadan is like a new year's resolution. "It's like a time I can change myself, be a better Muslim," she says in the film. "During that month I try to be the best I could be."

Personal willpower isn't the only challenge for the youth during Ramadan. At Cleveland High School, Muslim students can pray in the library, but many don't feel comfortable there, where other students come and go. A classroom set aside for prayer isn't always available. Certain practices, like ritual washing of hands before prayer, aren't easy to do at school.

Mills of ACRS, who edited the film with the input of the Cham youth, said he was surprised to see the barriers the youth faced to practice their faith. "It was very impressive to see some of the youth trying to adhere to this when you're in a system that makes it difficult," he said.

Near the end of the film, we walk with Mohamad into a classroom on the last day of school, to find that a teacher has brought her dog into the classroom. Because it's Ramadan, he's supposed to avoid the dog. "How does this work?" he asks out loud. He decides to come into the classroom, hoping to avoid the dog. "I'm hella rattled," he says sitting down. But the teacher comes around with the dog and asks if he wants to pet it. She seems to think he's just afraid of it and can overcome his fear. Mohamad says no, without explaining on camera.

Aly, who wears a hijab, talks about experiencing Islamophobia. "Sometimes I feel a little scared that people know something about me, and the first thing that they know about me is that I'm a Muslim," she says in a video diary, and describes an incident where a man at the bus stop told her to go back where she came from. "No one said anything," she recalls. "They just looked at him and looked at me."

The film focuses mostly on the youths' Muslim identity, though it does touch on what it's like to be Cham specifically. There's a generational gap in the community, and some older members aren't proficient in English. Walking through the street toward evening prayers, Mohamad films a video diary about the frustration of not being able to speak the Cham language with his parents and relatives.

To help close the generation gap, the youth wanted to include interviews with older Cham community members. The video diaries are interspersed with interviews from the imam and director of the Cham Refugees Community Center and a member of the board of directors, who explain the five pillars of Islam, the purpose of Ramadan, and Cham history.

When the Cham community held a screening of the film at ACRS, Aly said, there was a large turnout, from toddlers to elders. "I think they were very proud of us, because this was the first time where Cham youth are on screen and telling our stories," she said.

Mills said the film will be used in ACRS's programs for southeast Asian youth. While it's ultimately made for these young people, it was also aimed at a general audience. "There are a lot of stereotypes about how teenagers are, so when you watch something like this where they're able to be really open and share how they're feeling and what's happening for them, it's very refreshing and kind of exciting."

Ramadan will be screened as part of the Seattle Asian American Film Festival's Bring It Home shorts program of films about the Pacific Northwest on February 24.

Tweet
A Glimpse into the lost kingdom of Champa: Po Naga...
5 Delicious Street Food Dishes You Must Try in Cam...